Who doesn’t love a good joke about food? With food puns, you get the best of both worlds. So on one hand you are joking about something we all have some type of affection for, while on the other hand you have to let it roll around before you can simply digest the punchline. After a few of these food puns you are going to want to load up on some more until you are literally busting at the seams. Let’s start with the appetizer and move right into the main course of these 49 tasty food puns. Don’t forget to check also our cheese puns though. 1. It has been proven that those long lines at the fast food restaurants will lead to wait gain.

2. When the group of people heard that the cannibal will be serving finger foods, they all grew very silent.

3. Although the politician didn’t really like Indian food, he was extremely well at currying flavors.

4. One ancient myth tells the story of how Plato ran out of food once so he went shopping at the stoa.

5. When food testers at the local factory decided to go on strike it was called by the press a fast resolution.

6. The radio personality brought in a bunch of crunchy foods with her to the studio because it improved the sound bytes.

7. I have to tell you that peanuts are not all that they are cracked up to be.

8. Can someone please tell me why so many people eat pretzels when they really are knot food.

9. In a scary twist of fate, it was recently discovered that religious vultures will often prey on their food first.

10. The government says that the food served to guards will in fact last for sentries.

11. There was a food-themed restaurant on the Las Vegas strip that has already closed it’s doors that was call Goodbye, Gruel World!

12. Does anyone know what the leader of Russia loves his Czar-dines so much?

13. I could not please my Japanese cooking instructor no matter how much I bento-ver to learn his cooking techniques.

15. The man who worked at the food tasting factory had to quit his job this week because he had too much on his plate all the time.

16. The Red Cross was unable to ship a huge truckload of food because it was discovered that nothing was palatable.

17. That rotting food inside the garbage can at the restaurant was covered with thousands of flies because to the vectors go the spoils.

18. A health food consumer purchased fibre-optics from the optometry shop to help with her eyesight.

19. Those salty snacks are not that good for you, let me put it in a nutshell for you.

20. I had no issues eating at the Middle Eastern restaurant last night, it was this morning that I falafel.

21. While I was coloring eggs with the kids for Easter I accidentally ate some food coloring and now today I feel like I dyed inside.

22. The reason that I never tipped a cow before is simple, they have never served me food.

23. Although the fish was partial to cold food, he tends to like his bait a little worm.

24. I decided to change the color of my food from green to red because I was on a dye-it.

25. The aerobics instructor is very good at what she does because she does not like to see food go to waist.

26. If I am going to cook deep-fried foods, I always make sure that the cooking oil remains at a constant tempura-churro.

27. The group of protestors stopped in the Italian restaurant for dinner because they decided they wanted to give pizza a chance.

28. Socrates will only stop at the grocery stoa when he has to restock his kitchen cabinets with food.

29. My dad thinks he makes the best breakfast but me and my sister thing those eggs are not all they are cracked up to be.

30. We went out for Mexican food last night and everyone walked out leaving me to have to pay the taco bill.

31. I have never really had bad food on an airline flight before, but last night I have to admit that the haggis are just plane offal.

32. The fruit that was being transported from Honduras to the United States was rotten and became un-pallet-able.

33. The church pastor loved to bring his pipe organ into the garden and play, he thought it would help with his organ-ically grown food.

34. I can tell you from experience that trying to eat a clock can be very time-consuming.

35. Tami quit her job working at Dunkin Donuts because she was simply sick of the hole business.

36. My failed attempt at becoming a vegetarian was really a miss-steak that I wish I could take back.

37. I think it is time that I spring for a new colander because mine can not take the strain any more.

38. I lost my job at the factory because when making butter there is little margarine for error.

39. I won’t go out to dinner with my taxidermist friend anymore because each night I come home stuffed.

40. My mom is now on a seafood diet, when she sees food, she eats food.

41. The next time you go on a flight you shouldn’t get your hopes up about the dinner choices, it really is plane food.

42. The cannibal in Britain enjoyed eating fish and chaps.

43. I tried to finish the Thanksgiving leftovers but was foiled again.

44. The two loaves of bread decided they were going to get secretly married and eloafed.

45. That piece of cheese loves going to the gym to get shredded.

46. The two carnivores met on a dating sight and discovered that they eat steak when they meat.

47. In a strange twist of fate, the deer grabbed that gun and proceeded to give the hunter a taste of his own venison.

48. French people enjoy eating snails simply because they do not like fast foods.

49. Did you hear about the lettuce that killed hundreds of people on a cruise? It is an iceberg!

Hopefully you got your fill of these tasty food puns, if not, the good thing is you can simply go back to the top and enjoy these leftovers for as long as you like.

Lastly, don’t forget to read this article with some really funny and bad puns, or this one with some great breakfast puns. 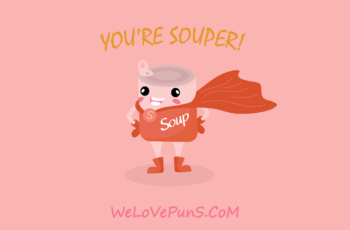 Lunch time is pretty much the best part of the …