There is good reason why dogs are considered the number one pet, so these dog puns will certainly connect with you on one level or more. For the dog lovers, you will see a little of your pooch in these puns, and for those who simply love to laugh, these thinking-man jokes will certainly have you feeling like you just scored a delicious treat. Don’t worry, you won’t have to beg for these great puns about dogs, we are ready to deliver the goods. So grab your comfy slippers, here is a list of 51 funny dog puns that should have you howling at the moon. 1. In a major scientific breakthrough, a mirror and a genetic dog hybrid gave scientists serious pause for reflection.

2. Kids are lining up at the movies already to see the new release about the hot dog, its being considered an Oscar Wiener.

3. The young lady was recently fired from working the hot dog stand because it was discovered that she put her hair in a bun.

4. When dog finish training at obedience school they go on to get their masters.

5. That race dog that came down with a bad case of the fleas was eventually scratched.

7. In order to see the real potential in my dog, there is no begging involved, you simply have to unleash it.

8. Since my dog is mustard in color, he is technically classified as a Golden Retriever.

9. Did you know that the medical term for being in possession of too many dogs is called a Rover-dose?

10. The little redhead was very upset that her dog swallowed her engagement ring because now she has a diamond in the ruff.

11. The reason that my dog failed his driving test was simply because he was unable to parallel bark.

12. Everyone says my dog is very agreeable. I tell them that is because he is a seeing-eye-to-eye dog.

13. The only way that I would agree to watch my neighbor’s dog was if he didn’t scratch me, it is in the clause.

14. It was funny watching the two dogs because they really had a bone of contention with each other.

16. I don’t mind if it rains cats and dogs, as long as we don’t get any reindeer.

17. Even though my dog can hunt for mushrooms underground he has become more truffle then he is worth.

18. Dogs and birds make great music together because they are both woofers and tweeters.

19. We are wondering if the reason that our dog will not drink tap water is because he is from the Scottish Perrier breed?

20. When I asked the hot dog vendor if my dog was welcome by his stand, he replied with a tone that was quite frank.

21. The reason our bird dog is considered the best in the land is because he is good to a point.

22. Last night on my way home from work it was raining cats and dogs and I notices there were poodles all over the highway.

23. My grandmother always uses collie flour when she is gong to be baking dog biscuits.

24. When you buy a tiny dog a very expensive mattress it is thought that they are simply sitting in the lap of luxury.

25. The reason you have to be very cautious around angry dogs is because they are considered to be cross-breeds.

26. There was a sign hanging in the window of the local pet store that read “Buy One Dog, Get One Flea!”

27. That frightened dog keeps running away from everything and is known as the Golden Retreater.

28. In a surprising news story, that dog who gave birth to puppies at the roadside was eventually ticketed for littering.

29. That dog is not allowed to attend the flea circus because he keeps on stealing the show.

30. The reason that police dog receives so many accommodations is because he is at the scenter of many drug arrests.

31. Food for very bad dogs is often bought by the pound.

32. Even though that dog is computer literate his bark is still much worse than his byte.

33. My dog went missing around the same time that I spilled some spot remover on him.

34. The coach always wants to put my dog in the baseball game because he always gets walked.

35. When you cross a bunny and a dog you are going to wind up with a rabid dog.

36. You should take a trip to the local hot dog factory because you never sausage anything like it before.

37. The flea could fly and the fly can flee, so it makes perfect sense that the dog can bark and so could a tree.

38. The reason that police dogs are so great at their jobs is because of the in-scent-ive.

39. I love going to the veterinarian because she really knows how to make my dog heal.

40. Even though the valuable dog was missing, the police have announced that they have a lead.

41. The dog attending the university because he was hoping that he would eventually get a pe-digree.

42. Make no mistake about it that a pure-bred dog is bona-fid.

43. Sheep dog puppies who like cantaloupe are considered to be a melon collie baby.

44. When your pet wants to go for a walk it can be very dog-matic.

45. In a strange twist of fate, the two seeing eye dogs wound up doing on a blind date with each other.

46. When the setter and the pointer were bred, around Christmas time they got a point-setter.

47. When there is any experimenting taking place with on dogs they are done with laboratory retrievers.

48. I can’t pull my dog away from the television whenever there is a Hairy Paw-ter marathon playing.

49. If you see my dog trying to read a book it is most likely by his favorite author Bark Twain.

50. Have you had a terrible day at work? Just try to pug-get about it and be happy!

51. What do dogs usually say before each meal? – “Bone Appetit!”

So there you have it, it was a little ruff getting through all these dog puns but I think you have to agree the trip was worth it!

Don’t forget to read our article with a selection of the funniest puns or this one with puns about mice! 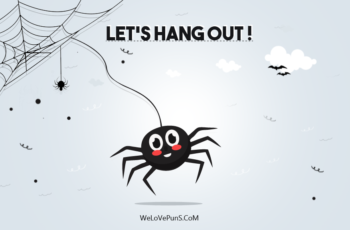 Though rarely spoken of, pandas have a life to themselves …