Nuts come in different types and for you to know all the categories, it may take a while. However, through nut puns, you can get around that rather quickly. Below are some nutty puns that will keep you and your friends busy and have fun time. 1. Believe it or nut, the same person who came to the office the other day happens to be the owner of the company.

2. The pea and the bean plant decided to tie the nut close to where they met the first time in the outskirts of the town.

3. If you want to succeed in life, you have to be ready to burn the midnut oil and go the extra mile.

4. Well, nuturally people from the south have a much darker complexion compared to those in the north.

5. All the peanuts decided to start a social nutwork where they would all link up for a common good and even advocate for their rights.

6. When I last saw the groundnut, he was headed for a cognitive therapy a few blocks from where I live.

7. Climate change has affected crop yields in many different ways. This nutwithstanding, the farmer continues reaping in thousands of bags.

8. The patient was advised to concentrate on plant-based nutrition if she wanted a much faster recovery.

9. The reason the pea was turned away from the job interview is because he is such a tough nut to crack and often thinks the other way.

10. The farmer went nuts because he was told it’s more profitable that way compared to other crops.

11. Many people have puns, but they will nut tella you.

13. When the peanut and the ring nut started arguing, the bolt retorted, “Both of you are nuts, haven’t you found something better to do?”

14. The moment I learned that I am what I eat, I realized that I was nuts.

15. Together with the salted peanuts package, he wrote a note saying, I am nuts about you.

16. If you hear what the squirrel eats, you will go nuts.

17. The reason the chipmunk swam on his back is because it wanted to keep its nuts dry.

18. A nut on a wheelchair is known as a busted nut.

19. Peanuts also have aspirations of flying around in space suits, these are called astronuts.

20. The peanut said to the elephant nothing because peanuts can’t talk.

21. The man smeared peanut butter on the road so that it can go well with the traffic jam.

22. The kind of socks you need when planting nuts are garden hoses.

23. The bar frequented by nuts for drinks is called the snack bar.

24. The other name for a kidney stone is a pee-nut.

25. What do you call the nuts that hang? Walnuts.

26. When you are sharing jokes and people go nuts, it is the high time you bolted away.

27. When nuts are spread all over your chest, you become chestnut.

28. Before she sent the document, she was requested to almond it.

29. When you are trespassing, you better be careful else they will cashew you.

30. Even though he was a had working person, everyone knew that dishonesty walnut get him anywhere.

31. Everybody has skolatons in their closets only that no one care to ask.

32. In a nutshell, all they did that day amounted to nothing.

33. The food in the restaurant is nut something I had taken before, but it was nut bad at all.

34. He looked at me with a penutrating glare and I knew all was nut well.

35. When he saw him coming, he kicked off his cashews and took off.

36. Scientists have just taken a picture of an almond in the space. They believe that it is an astronaut.

37. I would like to tell you a secret about peanut butter, but I am afraid that you would spread it.

38. What does the wind say to the almond trees: “Make sure to hold onto your nuts because I will do a blow job now.” 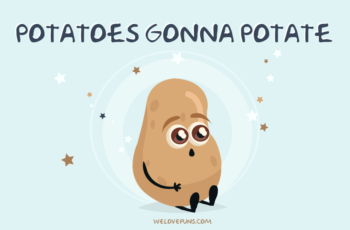 Potatoes are literally in every society and that makes their … Bread is a common food in most households and cuts …